For as many strides food manufacturers have taken to provide better quality, well, food, a recent report from the Environmental Working Group (EWG) reveals there’s still a lot of work to do. A lot.

The EWG has been publishing a list of the Dirty Dozen since they first realized the U.S. Environmental Protection Agency (EPA) wasn’t upholding legislation that required them to notify consumers of potential exposure to pesticides. Or at least not as well as they could be. Yes, the EWG acknowledges the EPA makes information on pesticides, and the effects of such, available on their website–but it’s not something consumers can easily understand or put into practice. So the EWG is, essentially, picking up the slack, sampling produce and creating a shopper’s guide so people, and their families, can stay safe while maintaining a healthy diet.

In addition to this year’s (worst) top 12, there are a couple (dis)honorable mentions: Kale, collard greens and hot peppers. The EWG finds this particular produce is shy of Dirty Dozen criteria, but is highly contaminated with toxins harmful to a person’s nervous system. You can read the full results of their samples, here. 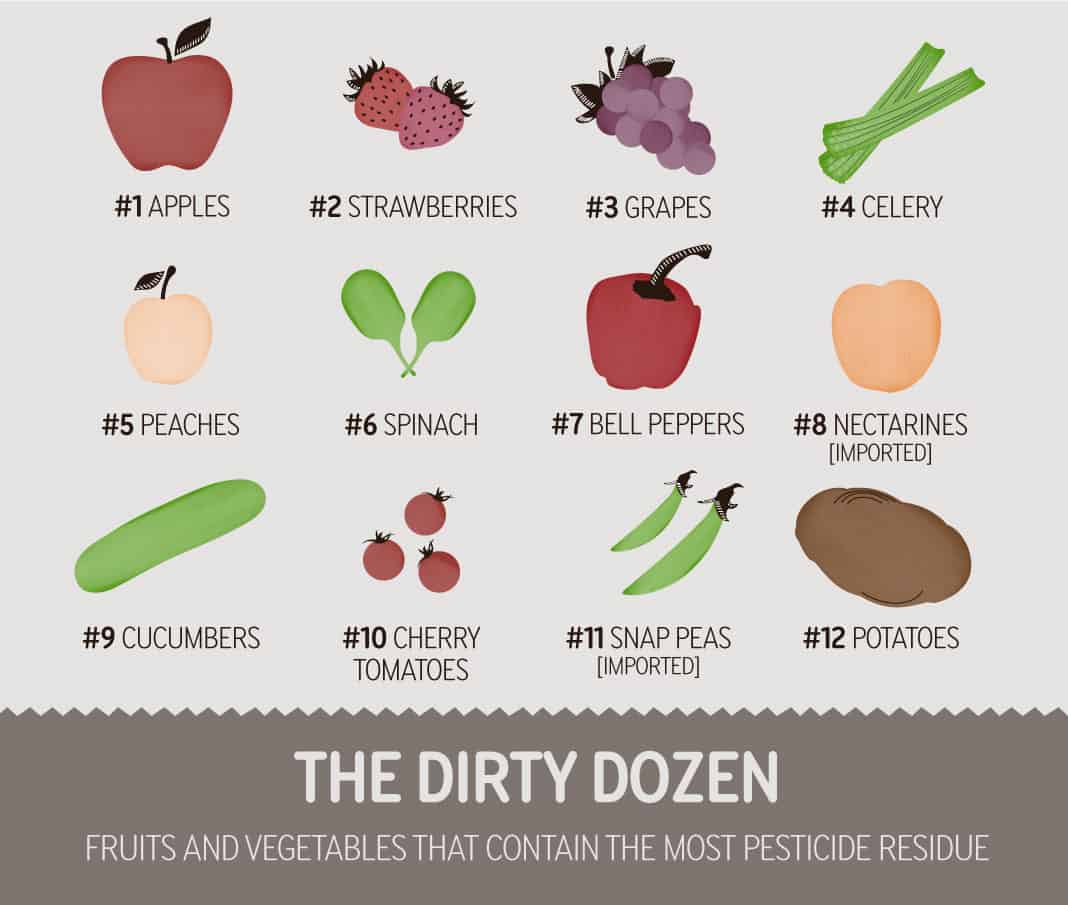 Why Pesticides Are a Problem

Of the over 1 billion pounds of pesticides used in the U.S., reports the EWG, almost 80% show up in conventional foods. And apart from that just being gross, pesticides are associated with the development of several diseases.

The effects are equally harmful to those who work and are otherwise exposed to pesticides, e g., farmers and fumigators. A 2009 U.S. Agricultural Health Study published in the journal Blood found daily contact with pesticides can double a person’s risk for blood disorder. Similar research from the University College London found farmers exposed to a low level of pesticides can suffer from cognitive dysfunction, including memory loss. And according to a study in the journal Neurology, people exposed to three or more pesticides were over three times more likely to develop Parkinson’s disease in comparison to those who weren’t. Rheumatoid arthritis, diabetes and even cancer are among other diseases that have been linked to pesticide exposure.

As bad as they are in our food, pesticides are even worse in the environment. Rodale News reported in 2013 that the excessive amounts used in the U.S. are killing off both honey bees and songbirds. And a study in the journal Environmental Perspectives finds “increasing temperatures and changing precipitation patterns can affect crop yields.” Which, inadvertently, affects people, too.

Shop Smarter At The Grocery Store

It’s a lot of negative information, we know. But for every dirty fruit or vegetable, there are conventional foods that are not highly contaminated–or the “Clean 15.” These are, per EWG’s report, avocados, sweet corn, pineapples, cabbage, frozen sweet peas, onions, asparagus, mangoes, papayas, kiwi, eggplant, grapefruit, cantaloupe, cauliflower, and sweet potatoes. 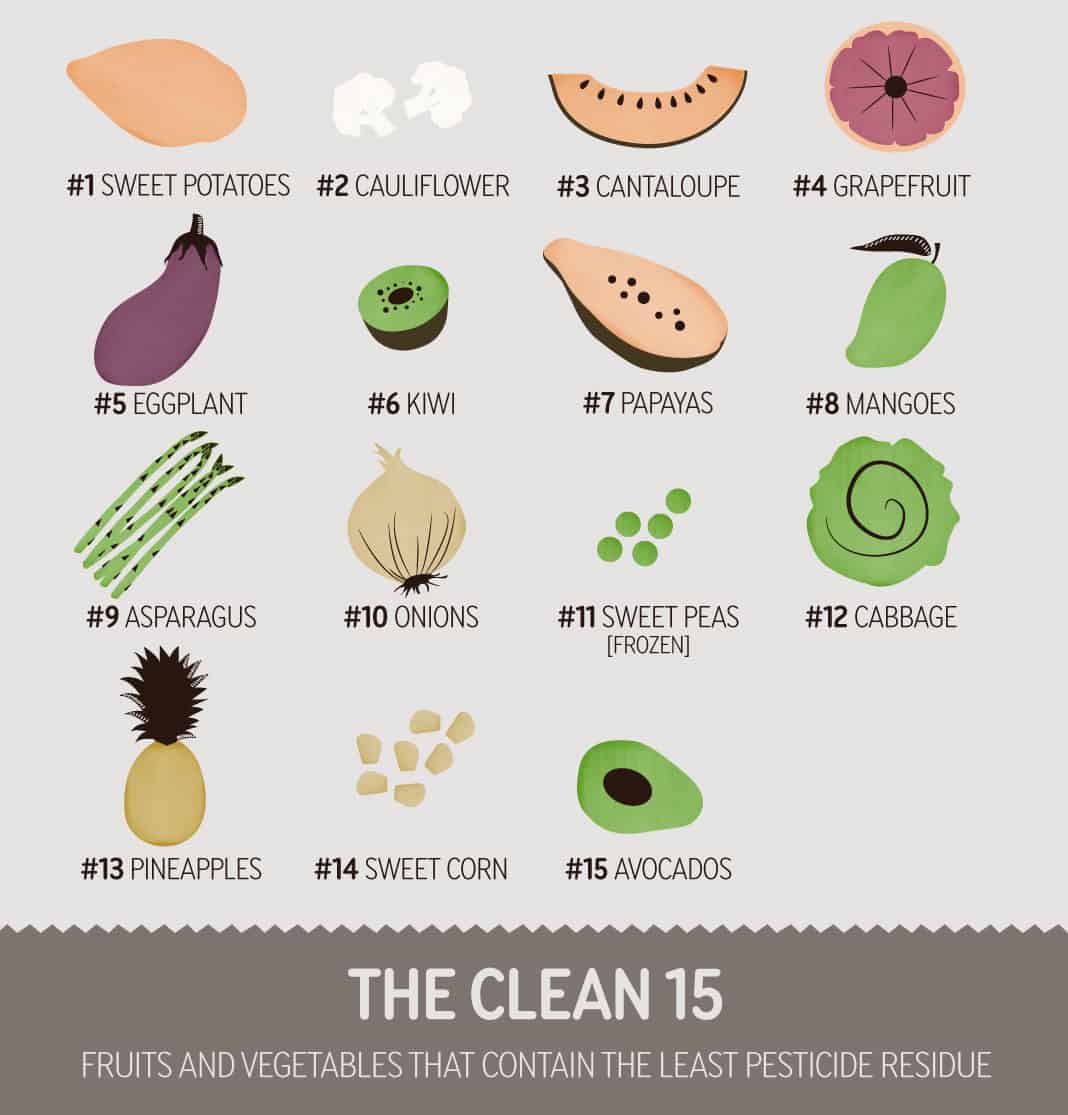 The idea is to buy the clean foods conventional while buying the dirty foods organic. That’s not to say organic is automatically better than conventional. True, there’s less of a risk (and it is the EWG’s official suggestion, at least in the case of the dirty dozen)–but 43% of the organic produce samples in a USDA study tested positive for pesticides. Not to mention the  2010 study found mineral-based organic pesticides can cause an environmental problem. 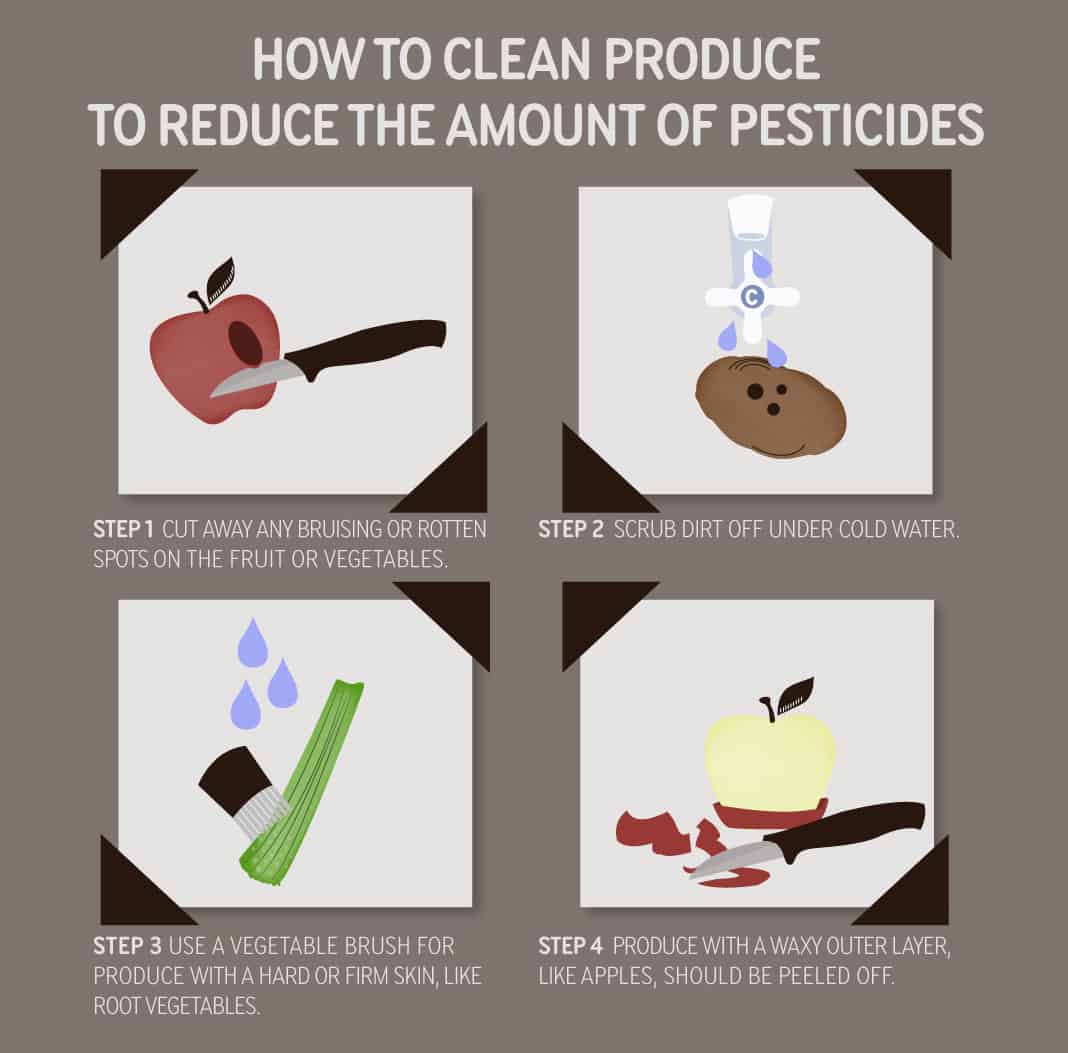 The FDA then recommends cutting away any part of fruits or vegetables that looks bruised or rotten before scrubbing the dirt off under cold water. Any produce with hard or firm skin, like root vegetables, should be scrubbed with a vegetable brush. And the waxy outer layer on, say, apples, should be peeled off.

Tip: More and more companies are offering fruit and vegetable sprays to spritz produce with, let it sit, and then rinse for a closer clean. The Honest Company’s Fruit & Veggie Wash offers a tasteless, non-toxic formula.

Protect Yourself From Pesticide Poisoning

The EPA estimates tens of thousands cases of pesticide poisoning are reported each yet–and that’s just in farmers alone. To protect yourself, it’s important to also know the symptoms. First, per Cornell University’s Pesticide Safety Education Program, there are two kinds of poisoning: acute and chronic. Acute poisoning can take place after a single dose of pesticides while chronic poisoning takes place after repeated, small doses. Though the symptoms vary depending on the dose and kind of pesticide, unusual headache, fatigue, dizziness, nausea, diarrhea, loss of appetite, loss of weight, thirst, moodiness, soreness in joints and skin irritation is reason to call your doctor. For additional resources on what to look for and how to stay safe, visit the Centers for Disease Control and Prevention.