We won’t go so far to suggest knocking back beer and nachos is a great health habit—but we can show you some science behind the health benefits of drinking wine—in moderation, of course.

In 2014, Americans consumed 893 million gallons of wine; that’s about 2.8 gallons per person. (One bottle of wine is one-fifth of a gallon.) From heart health to cancer prevention and even weight control, there a number of studies that support the habit of a glass a day to keep the doctor away.

Most of wine’s benefits stem from resveratrol, a type of plant compound with high levels of antioxidants called polyphenols. Only red and purple grapes contain resveratrol, which is why researchers mostly tout the healthy advantages of red wine. And while there are supplements available, isolating resveratrol doesn’t provide the same benefits as a glass of vino in its natural state.

Ready to dive deeper into these studies? Want the answers to questions like, “Is wine really better than exercise?” We‘ve got the low down on the science, plus the best way to drink wine to reap all of its tasty benefits. 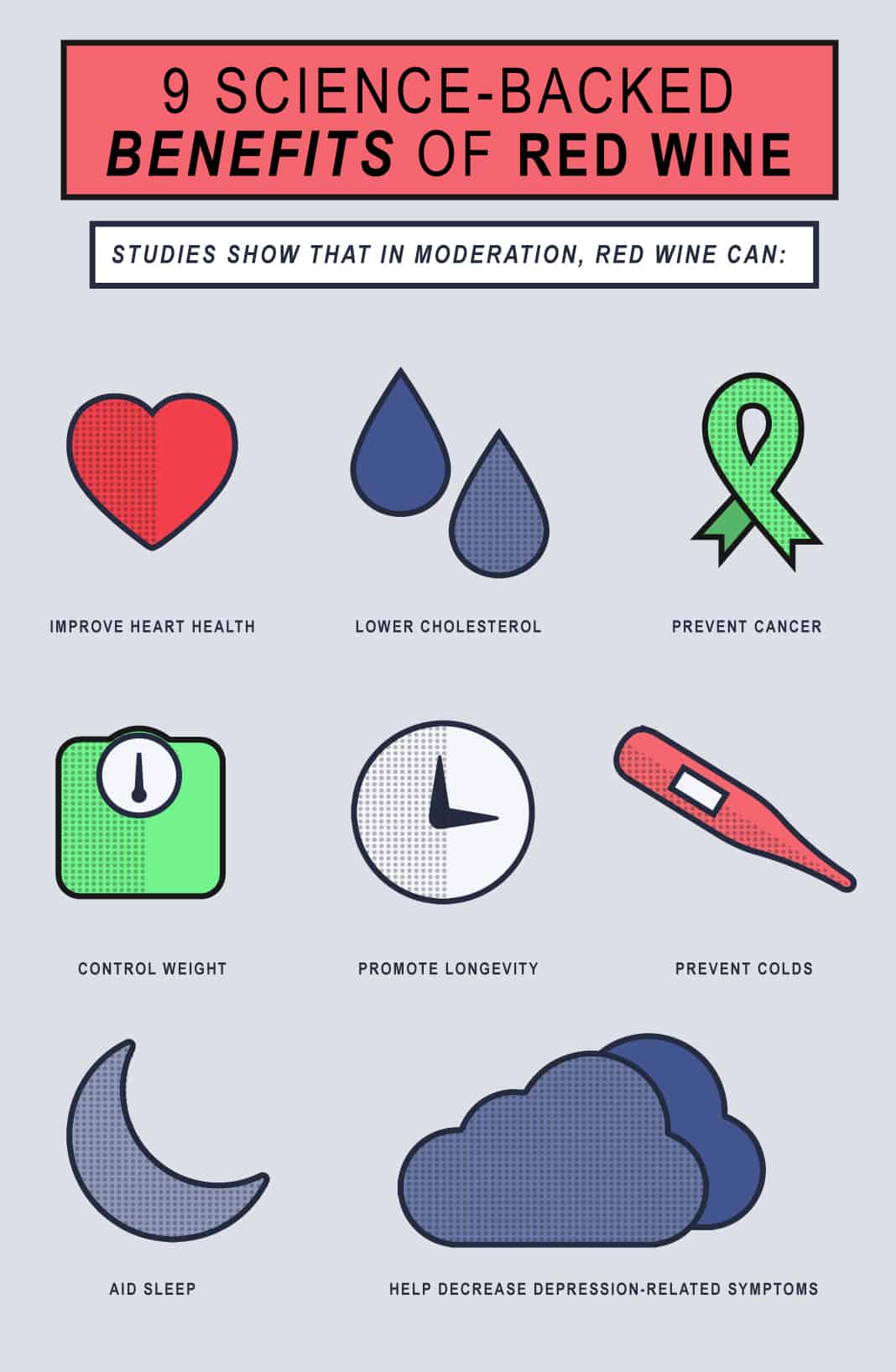 Probably the most studied benefit of wine is its correlation to heart health. In one publication that summarized many studies, scientists conclude moderate red wine drinking (up to one drink a day for women and two for men) may help prevent cardiovascular disease. How? Polyphenols, the antioxidants in red wine, can protect the lining of blood vessels in the heart. The caveat, however, is that most of these studies have been done on mice, not humans, so don’t assume chugging a bottle of wine a night guarantees a stronger heart.

Our cholesterol levels are also connected to heart health. In one study, scientists followed the lives of 69 healthy men and women ranging from 38 to 74 years old. They found moderate red wine drinking for one month increased HDL cholesterol—the “good cholesterol.” Still, the study does discuss other lifestyle behaviors, which could have also been attributed to the change in cholesterol levels. Another study reported similar results: Red wine was connected to a small increase in HDL levels.

Resveratrol strikes again, this time with chemoprevention powers that can inhibit, delay, or even reverse carcinogenesis associated with cancer. A collection of studies (looking solely at research with rats) revealed a connection between moderate red wine consumption and the prevention of various types of cancer.

However, not all news is good news: When looking at specific cancers, a research article examined two studies that examined more than 88,000 women and 47,000 men to investigate the link between red wine and the risk of several types of cancer. They found moderate drinking of red wine led to a slightly increased risk of breast cancer.

The Mediterranean Diet—with its number one star, red wine—shows up again. This time, a study looked at blood lipids, HDL, and LDL (the bad type of cholesterol) and weight control with people who have carotid atherosclerosis, a disease that affects the heart. Participants followed a Mediterranean diet, exercised, and enjoyed a glass of wine. The result? HDL levels increased and LDL levels decreased, an equation that has been shown to control weight.

But not all studies share the same results. In a study that looked into the affect of high doses of resveratrol on fat cells in mice, researchers found more resveratrol led to higher developments of fat. Still, it’s important to notice that what affects mice may not have the same effect on people.

Want to live forever? A little wine could do the trick. A meta-research summary broke down 34 studies of more than one million people to find trends between wine consumption and mortality. The great news: Researchers found an inverse relationship between moderate drinking and death, meaning a healthy amount of wine could actually up your survival rate. 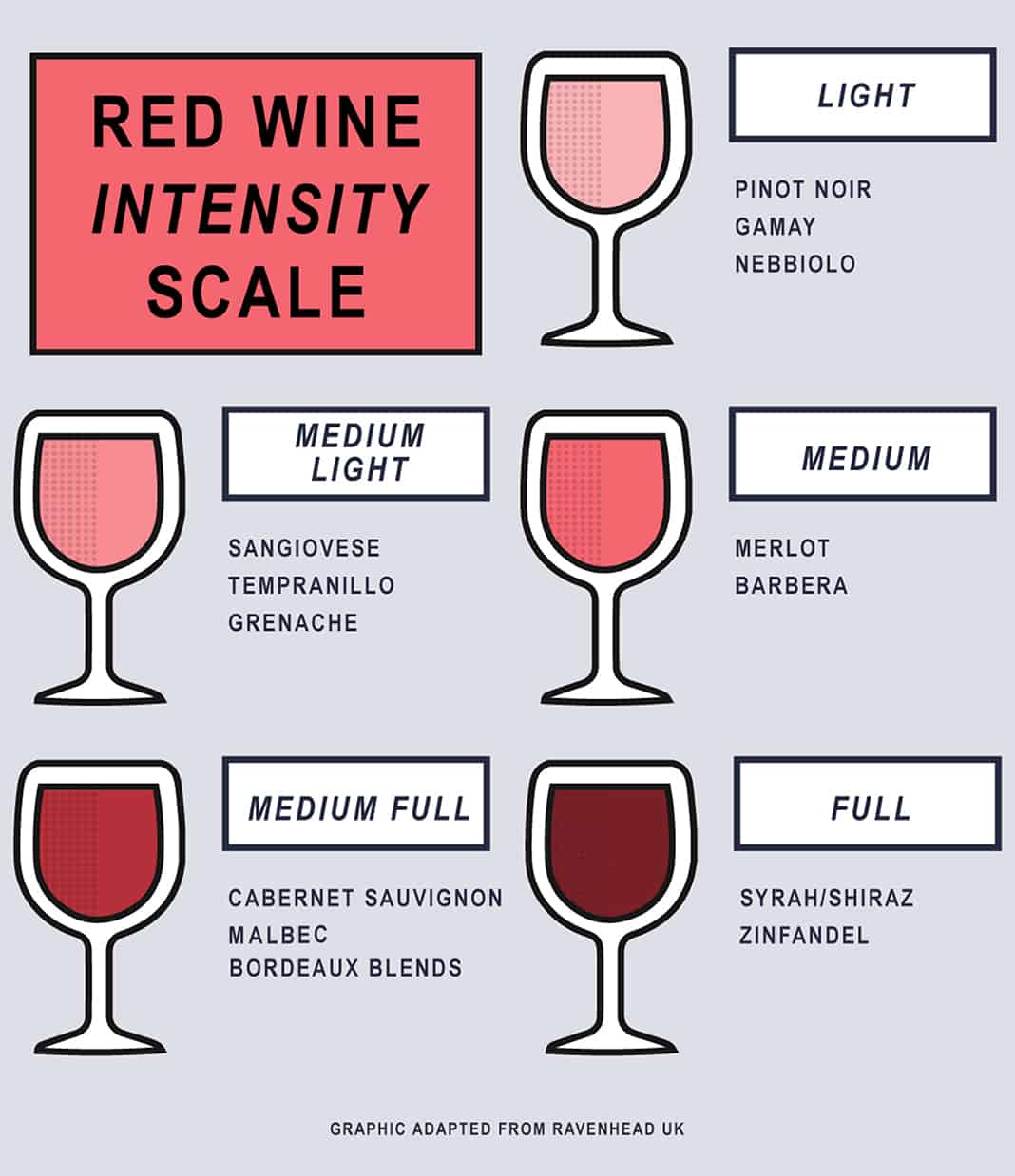 Who knew red wine could actually help prevent the common cold? In a study of 900 Japanese men, scientists looked at the connection between frequent wine drinking (versus the actual amount of alcohol) and the prevalence of having colds. They found that the more often participants drank (seven days a week versus three), the less often they caught a cold. Take this advice lightly though: Make sure to not exceed one drink a day

In additional to resveratrol, which typically takes the main stage when it comes to wine’s health benefits, grape skins have their own important benefits. The skin contains melatonin, the hormone that helps control sleep and wake cycles. A study looked at the amount of melatonin in grapes used for various types of wine. Researchers didn’t actually see how it affected people’s sleep, but they did conclude certain wines (such as Cabernet) contained high amounts of melatonin to help keep people’s circadian rhythm in check.

If you’re feeling down, enjoying a glass of wine to relax could be a wise choice. Yet another study on resveratrol found certain amounts led to the prevention of inflammation and other signs of depression-related symptoms in mice’s brains. Scientists are hopeful they can perform similar studies on other rodents, and potentially draw larger conclusions on resveratrol’s potential to keep stress at bay.

Recently, two studies on red wine reported findings that seem a little too good to be true. The first compares drinking to exercise, which created headlines in the media that touted, “Drink wine instead of hitting the gym!” What the study really showed, however, was that resveratrol could help improve physical performance (such as heart function and muscle strength), not that it was a legitimate substitute for working out.

Another study that grabbed headlines was about people who swapped late night snacking for wine drinking, and how that led to losing more weight. The consensus? Sure, people may lose weight by drinking a glass of wine at night. But that’s mostly due to the number of calories in a glass of wine versus typical after-dinner snacks.

When We Exceed Moderation 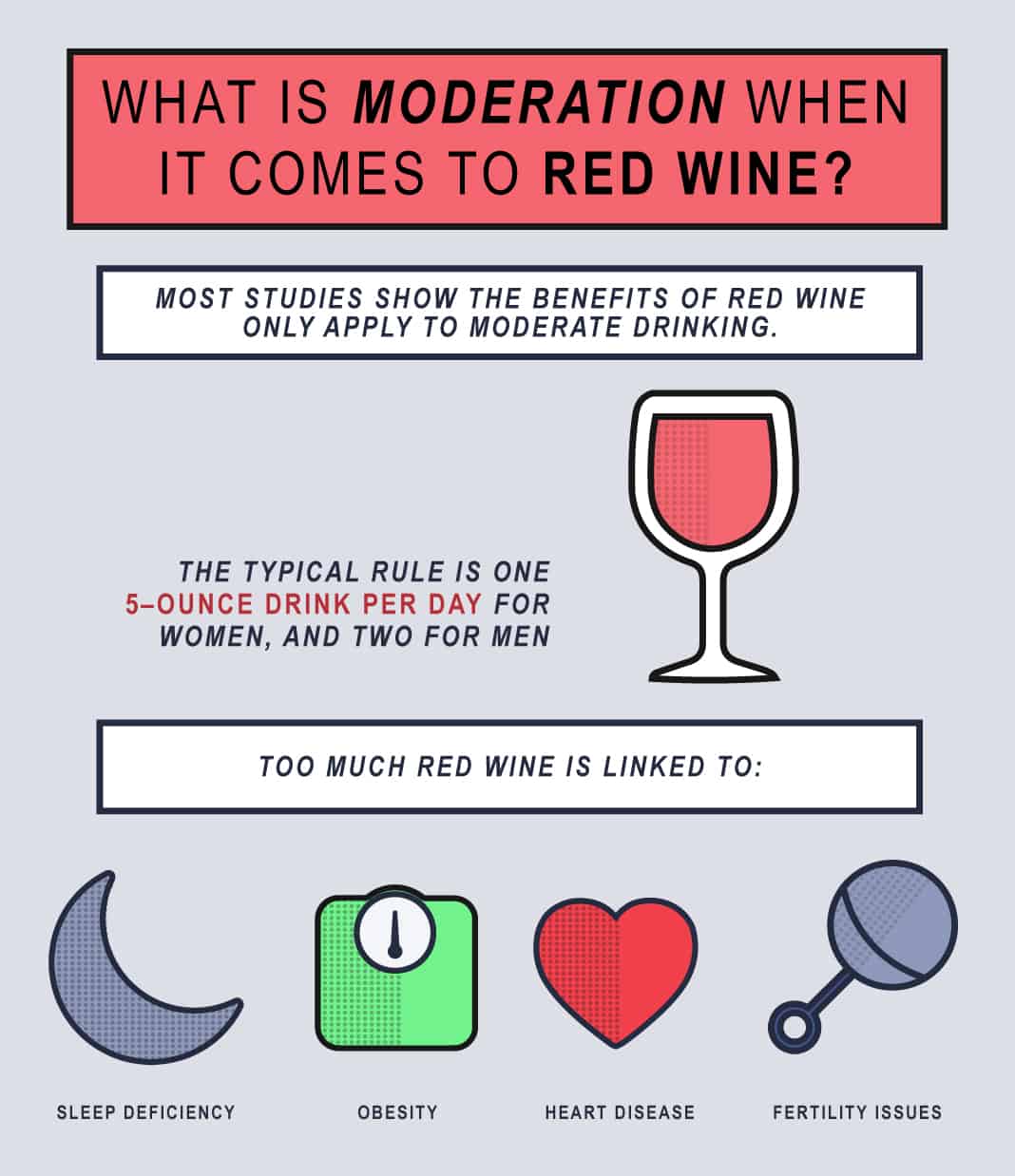 Turns out too much of a good thing can really be a bad thing. The key to reaping the benefits of wine really comes down to two things: Drink red (which contains resveratrol) over white and stick to moderate servings. The definition of moderation varies, but the typical rule is one drink per day for women and two for men.

Once we exceed that, trouble may follow. Studies show that too much red wine is linked to sleep deficiency, obesity, heart disease, and fertility issues.

The bottom line? While many studies link red wine to better health, it’s important to understand that adopting a healthy lifestyle is the key to feeling good. As long as you do not exceed one to two glasses a day, and fill in the rest of the blanks with a balanced diet, regular exercise, and enough sleep, a little red wine can do the body good. 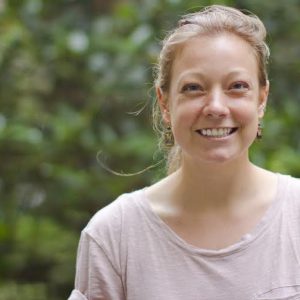 Laura Schwecherl is the Marketing Director at Possible, a nonprofit healthcare company based in New York and rural Nepal. She was the previous Marketing and Partnerships Director at Greatist, which exposed her love of writing about health and wellness. In her spare time, she is either training for a marathon, writing poems, or eating tacos.