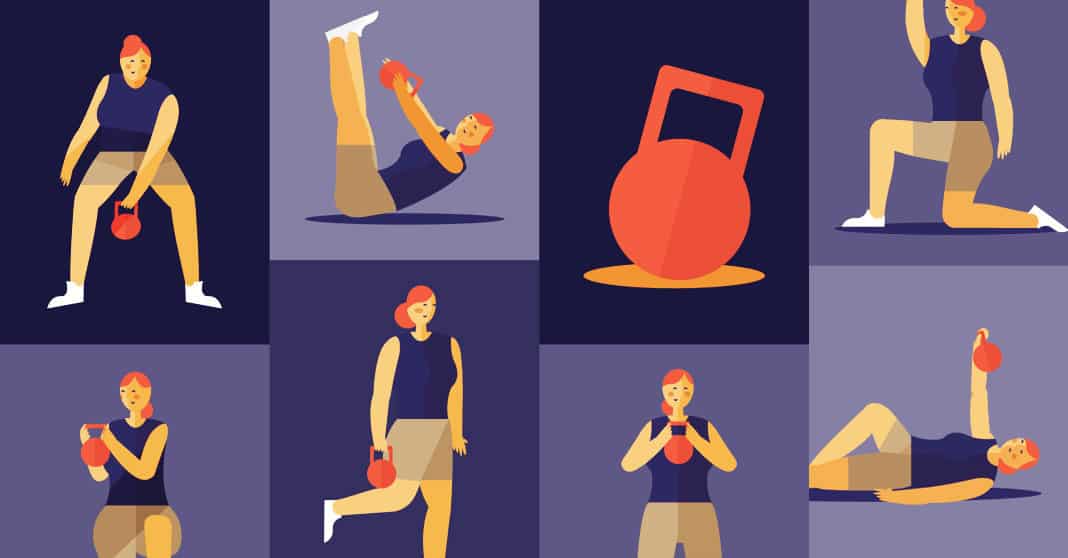 Strengthen Your Core With This Easy To Follow Kettlebell Exercises

If you haven’t heard of them yet, kettlebells — cast-iron weights, which resemble a bowling ball with a flat bottom and handle on top — are all the rage in gyms and home gyms alike. Training with the Russian-born fitness tool helps improve strength and cardiovascular endurance, plus they’re great for balance and flexibility. Because of their unique shape, and the way weight is displaced through each movement, kettlebells challenge both big muscles, and the smaller muscles surrounding them, more than similar moves using dumbbells or a barbell. When it comes to a strong, powerful core, kettlebells are a great piece of equipment to add into your routine.

And remember, a killer core isn’t just about six-pack abs. The core encompasses the major muscles that move, support, and stabilize the spine, including the mid, lower, upper, and side abdominals (aka obliques), the back, and hips. Having a strong core not only looks great, but helps us maintain good posture, balance, and stability. So grab yourself a ‘bell, and try out these awesome core-focused moves!

Great for obliques, windmills require the side body to pull the weight of the kettlebell to return to standing. The major benefit of this move is the wide range of motion that’s hard to achieve from ab exercises performed on the floor.

How to: Position a kettlebell in front of one foot. Reach down, hinging at the hips to grab it with the opposite hand. Pull it toward the same shoulder while returning to standing, than rotate the wrist so the palm faces forward. Extend the elbow until it’s straight, pressing the kettlebell straight overhead (again, remember not to arch too much in the back, focus on keeping the tailbone perpendicular with the ground rather than tipping up toward the back wall). With the kettlebell still in the locked out position, push the butt out toward the same side as the outstretched arm, bending sideways until the opposite arm touches the floor. Keep the eyes focused on the kettlebell and make sure to turn the feet out to about a forty-five degree angle to prevent injury in the knees. With control, return to standing and repeat on the other side. 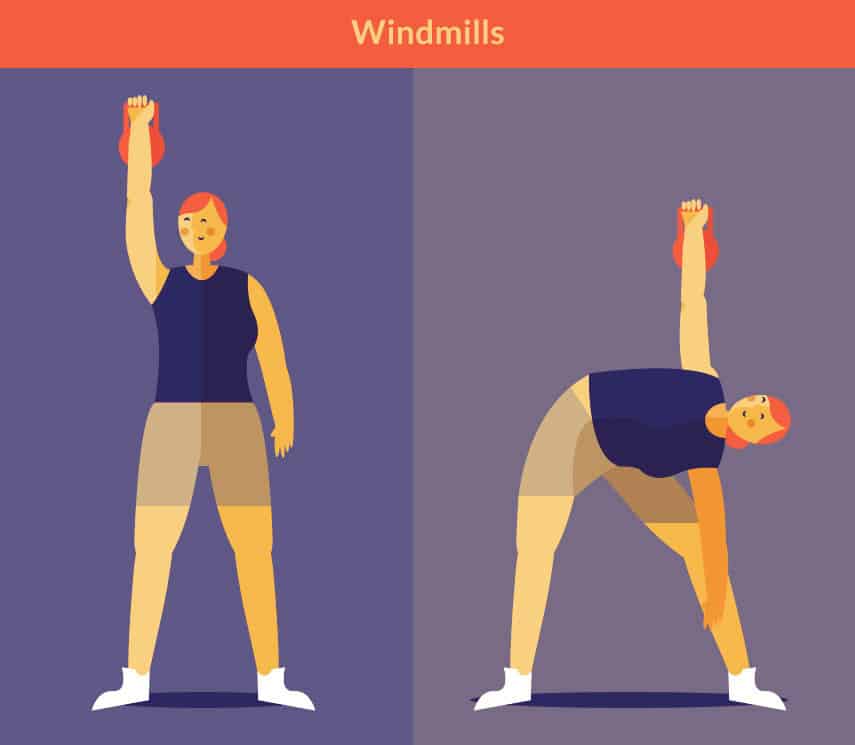 A super tough, but super effective total-body move, the Turkish get-up is a great one to add to your workout arsenal.

How to: Lie down, back to the floor, and press a kettlebell toward the ceiling with a straight arm (the arm should be perpendicular to the floor). Bend the knee on the same side as the kettlebell and pivot the body into a lunge (use the free hand to push to a seated position before moving onto the bent knee). Hold your gaze up toward the kettlebell, then slowly and with control come to standing. Reverse the motion back to the starting position, then repeat with the opposite leg. Throughout the move, make sure to avoid arching the back, or allowing the weight to fall too far behind the head, in order to keep the back safe. 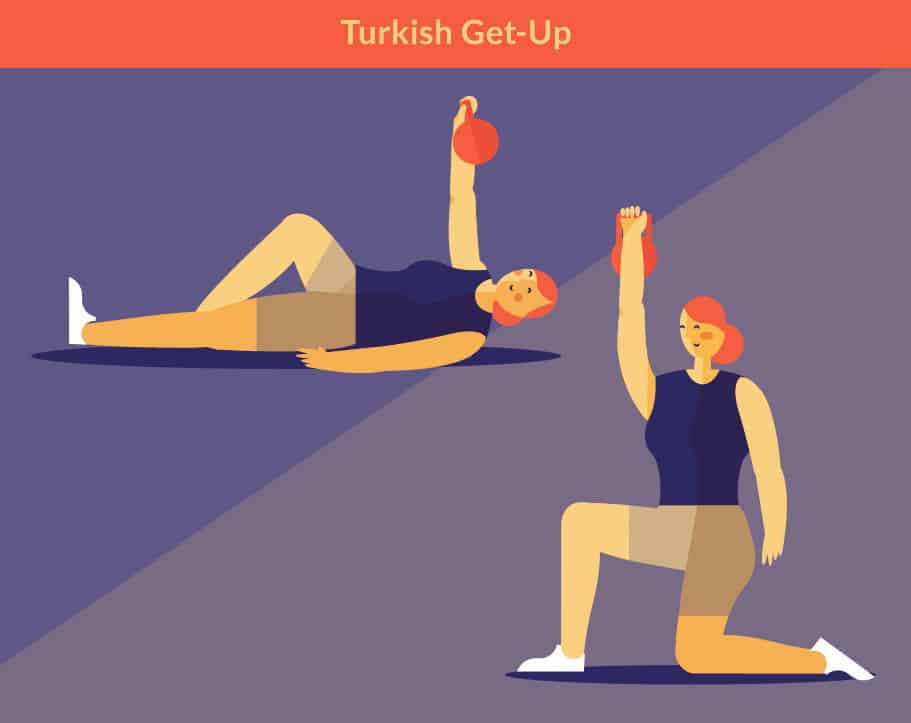 The Russian twist is a great move on its own, but adding weight makes fewer repetitions all the more effective.

How to: Start in a seated position, holding the kettlebell with both hands in front of the chest. With the back in a neutral position (work to keep the back flat, shoulders back and down, rather than curve the belly in), bend the knees and lift the feet off the floor. Slowly, and with control, twist the kettlebell across the body until it’s just above the outer side of one hip, then arc it to the other hip, without ever touching the bell to the floor. Make sure to look straight ahead and keep the legs stagnant throughout the move.

Combining both a lunge and a rotation, this double-whammy move will have you feeling the burn in just a few reps. 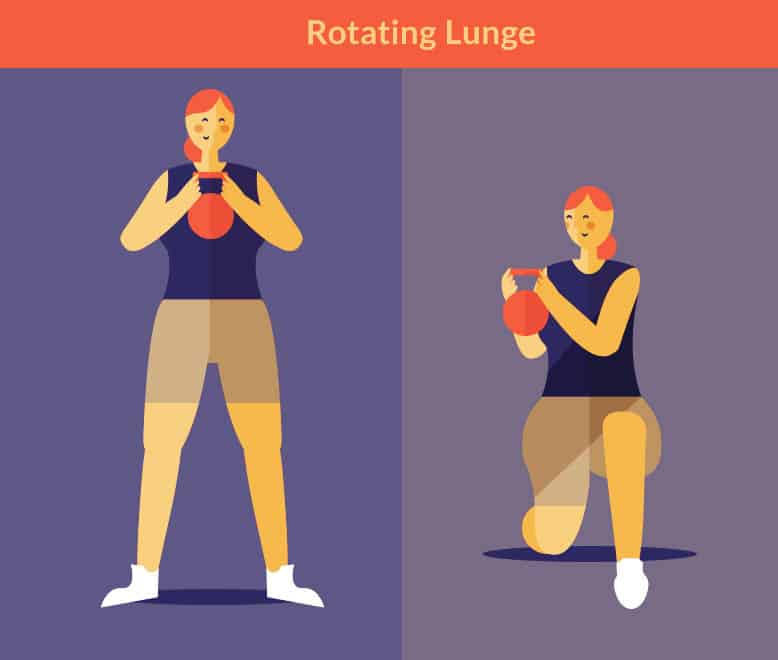 Take boring crunches to another level and ignite those hard to target lower abs. 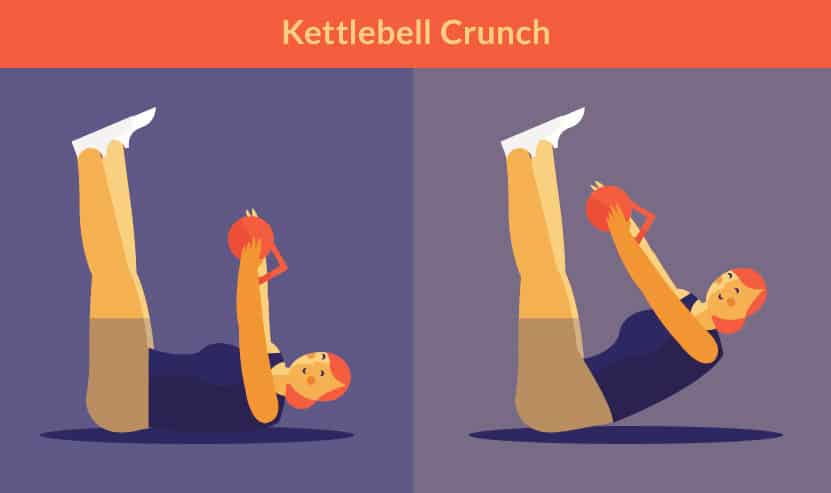 While this move definitely strengthens the hamstrings and arms with the deadlift and row motion, the core challenge comes from balancing the body through each intricacy of the exercise.

How to: Stand with feet shoulder-width apart, kettlebell in one hand, to the side. Lift the opposite leg a few inches off the floor, hinge from the hips and reach the lifted leg behind you toward the back wall. All the while, lower the kettlebell to the floor without letting it touch. Pull the bell up toward the ribcage, keeping the elbow close to the body. Make sure to keep the back flat and work to create a straight line from toe to crown of the head (which should be parallel with the floor, perpendicular with the standing leg). Slowly return to standing. Rest the moving leg on the floor between reps, or challenge yourself by not making contact. 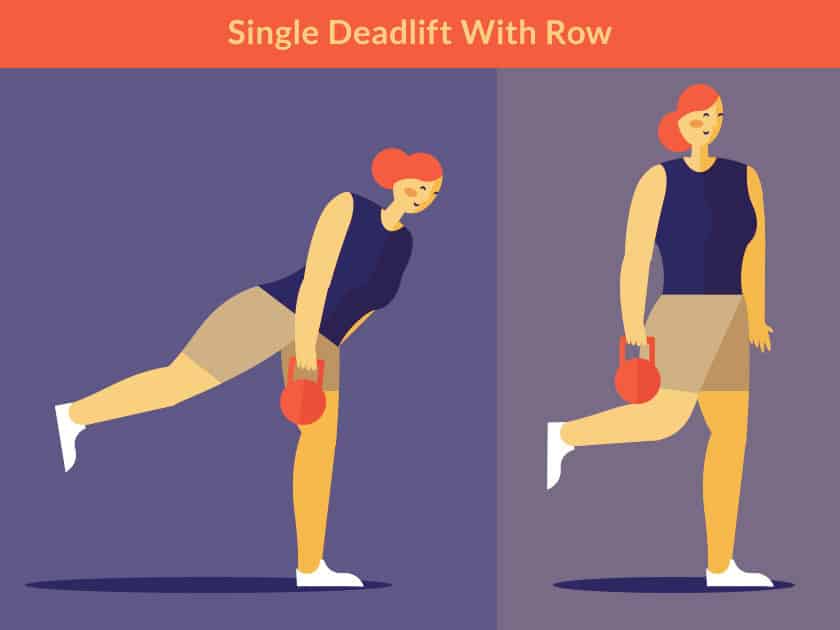 Though you may fear for your walls and windows (hold on to that kettlebell tight!) the swing is a great functional move — meaning it combines movements we use in real life.

How to:Place the kettlebell on the ground between the feet. Hinge from the hips to grab the kettlebell with one hand (the other arm can gently swing back behind you). Drive through the heels to swing the bell upward. Keep the back flat, core engaged (tense the muscles in the abdominals and back throughout the motion), and look straight ahead. Push the pelvis slightly forward at the top of the move, and only bring the arm to a little more than parallel with the floor, then let the kettlebell swing back through the legs. Exert most of your effort when driving the body up to standing. For an extra challenge, try switching hands mid-swing. 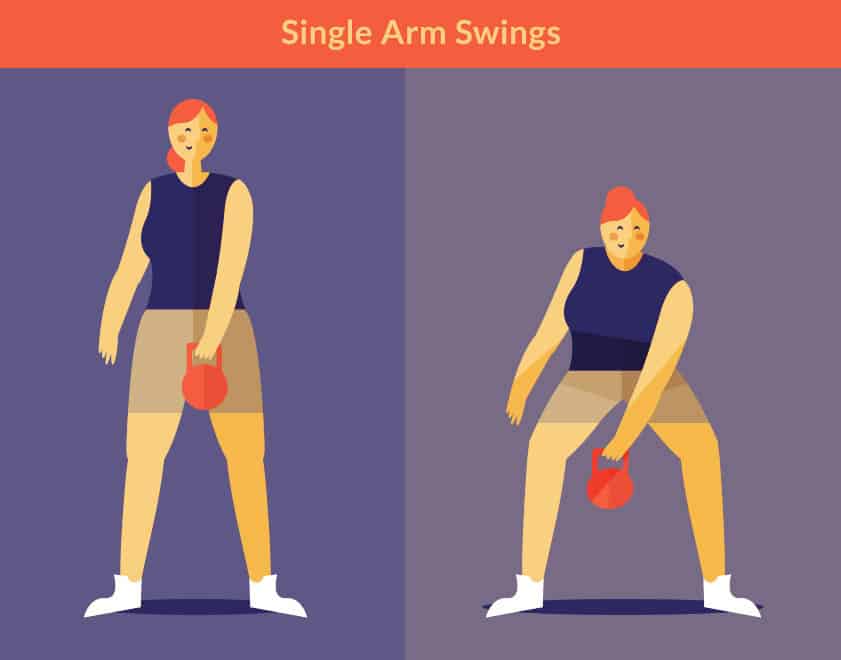