Here’s everything you need to know (tasty recipes included).

Bisque, risotto, lasagna, sauté, soup—there’s no getting around it: Winter squash is the fruit to cook with during the cold-weather season. Beyond just carving them for decoration, roasted pumpkin, squash, and gourds (all members of the curcubita genus) make for the perfect addition to a warm and comforting dish. Amidst reports this winter will be equally as frigid as the last, we’ll take all the healthy, warming meals we can get.

Of course, the squash didn’t start out as the diet darling we know today. More than 4,000 years ago, squash and gourds, which are actually harvested in the fall, were hollowed out and used as dishware. Researchers from the University of Missouri studied the residues in these “dishes” and found traces of starch grains, including potato and arrowroot (an interesting peek into the eating habits of early settlers).

Today, these fruits aren’t just welcome additions to our meals, but also rich sources of healthy nutrients. One study found women who maintain diets high in lutein and zeaxanthin—both found in pumpkin and butternut squash—reduce risk for age-related macular degeneration (AMD), the leading cause of blindness in older Americans. Previous studies have shown these compounds work to reduce risk of AMD by absorbing “free radicals from damaging eye cells and by strengthening eye cell membranes.”

Probably the most recognizable healthy compounds associated with winter squash are carotenoids. A type of phytonutrient, carotenoids give squash their trademark yellow, orange, green, and sometimes red colors. Yellow and orange squash source their hue from alpha-carotene, beta-carotene, and beta-cryptoxanthin, all of which are high in vitamin A and can be converted into retinol for eye health. Green squash sources its hue from lutein and zeaxanthin, while red squash sources its color from lycopene.

As if that weren’t reason enough to load up on carotenoids, a study published in the Archives of Internal Medicine found increased consumption of the antioxidant is associated with reduced risk of death. Yellow-orange vegetables, such as carrots, sweet potatoes, pumpkin, or winter squash, and dark-green vegetables, such as broccoli, green beans, green peas, spinach, turnips greens, collards, and leaf lettuce, are rich in alpha-carotene, which was strongly associated with a decreased risk of lung cancer compared to other types of vegetables.

It’s clear the health benefits of squash are just about as abundant as the squash themselves. Before you get roasting, read on for squash-specific tips, from selecting them at the grocery store to foolproof prep.

The Skinny on Squash

Let’s start with the basics. The Old Farmer’s Almanac advises perfect-looking, “sunned” squash keep longest. In this case, sunned simply means squash stored in a sunny spot for a couple of weeks. Usually, the farmer has already taken care of this. You’ll know you picked the perfect squash if it’s blemish- and bruise-free, and the stem is intact.

Every squash is different. Some are ideal for stuffing and baking, others just for baking. A majority of squash, however, taste best when roasted. For a quick, easy way to roast, toss cubed squash with oil, spread on a baking sheet, and cook until desired consistency, usually fork-tender. Or, if you have more time, carefully wash, peel, and cut squash into same-size pieces before evenly coating with olive oil. Season with kosher salt and pepper, then spread on a baking sheet to roast.

Why roast? Sending squash to the oven sweetens the flavor profile. This makes fruits and vegetables look great (that nice golden brown color) and more palatable to the people who aren’t the biggest fan of veggies. Ultimately, the characteristic of each individual squash will determine the best method of cooking.

AKA: Pepper or Des Moines Squash

No surprises here: This squash’s name derives from its acorn-like shape. Its color varies, from yellow to tan, but the most common type is dark green with a touch of orange on the top. It’s best for stuffing (with rice and meat), but can be roasted and sautéed. Some even toast the seeds for a snack that’s rich in protein, zinc, iron, and vitamin E.

Acorn squash isn’t as rich in beta-carotene as other varieties, but one cup contains 145 percent of the daily recommended serving of vitamin A (2,300 IU for women, 3,000 IU for men), in addition to high levels of vitamin C, potassium, manganese, folate, heart-healthy omega-3s, and fiber (a key factor to feeling fuller, longer).

TRY IT: Stuffed Acorn Squash With Apples, Walnuts, and Cherries

Talk about the bell of the ball: This long, bell-shape squash is sweet and creamy, and arguably the most popular of the bunch (or patch?). Its skin is yellow while the pulpy flesh is orange and deepens as it ripens. It’s also the one fruit prepared most as a vegetable: roasted, toasted, pureed, mashed, and so on. It’s often served as a side or sauce rather than stuffed for a main meal or baked into dessert.

Vitamin A is abundant in butternut squash, and it is rich in vitamins, like brain-boosting folate, iron, zinc, copper, calcium, potassium, and phosphorus. 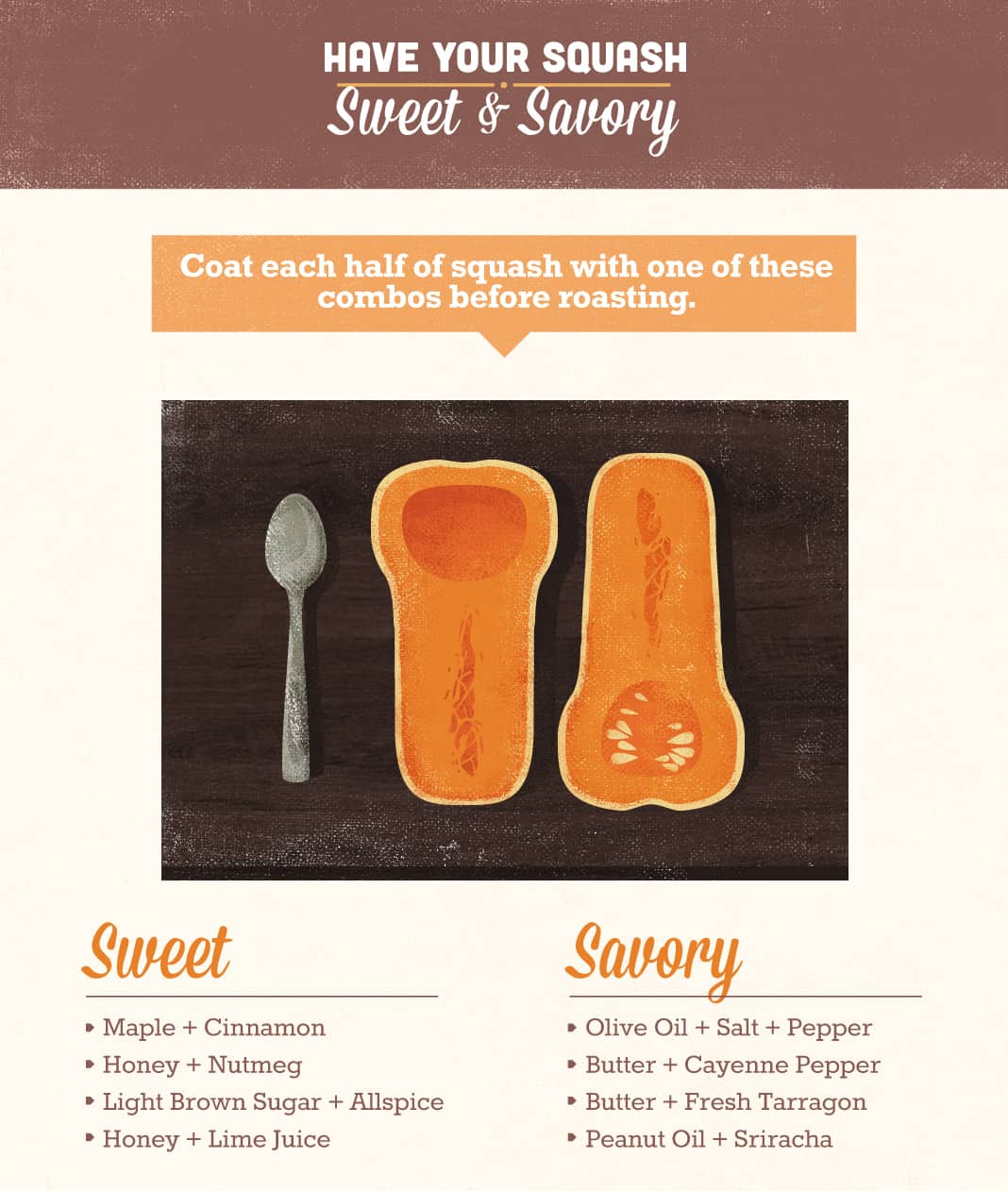 Butternut squash may be a fan favorite, but pumpkin is the season’s staple fruit. There are jack-o’-lanterns for carving, and sugar pie pumpkins for baking, roasting, and puréeing. Technically, you could eat the carving pumpkins, but they’re too wet and bland.

A cup of cooked pumpkin packs another serious punch of vitamin A—more than 200 percent of the recommended amount—as well as fiber and a hearty dose of tasty, healthy seeds. Pumpkin seeds contain a plant-based chemical called phsyosterols, which have been shown to lower LDL, or bad, cholesterol.

Kabocha squash is similar to butternut squash because its bright, orange flesh is a good source of beta-carotene, vitamin A, iron, vitamin C, and some B vitamins. It’s also loaded with fiber.

Compared to the tough skin of other squashes, kabocha’s is soft and edible so it can be cooked before peeling. Consider using kabocha to thicken soups and stews. Otherwise, roasting is a safe, delicious bet.

Chances are you’ve seen the oval, yellow squash pitted as a substitute for starchy noodles and rice. That’s partly due to its stringy flesh, which easily separates into spaghetti-like strands once cooked. Unfortunately, a squash is still a squash, and its pasta-like texture isn’t an exact texture and flavor substitute for the real thing.

Spaghetti squash contains only 37 calories per single, four-ounce serving (though you may want to double or triple that portion for a main meal). And since it can be boiled and microwaved, spaghetti squash is a great staple for busy work nights. To jazz it up, cut the squash in half, rub it in oil, season with a little salt and paprika, then pop it in the oven in a casserole dish or on a baking sheet. Just because this healthier pasta imposter isn’t the real deal doesn’t mean you can’t top it with traditional sauces, such as Alfredo, marinara, or a roasted-veggie-loaded version.

With its creamy flavor and texture, delicata squash resembles a discolored cucumber. Its pale, yellow skin is patterned with dark green stripes. Its flesh is easy to prepare and eat, like kabocha squash, and it tastes like sweet potatoes.

To some food bloggers, delicata squash is considered squash for lazy people. Its skin is super thin and the squash itself takes no time to chop and roast. It contains high levels of beta-carotene, and half-cup serving is chock-full of vitamins A, and C, plus it has just 20 calories. Super quick to cook and nutritious? Sign us up.

It may not seem like it, but hubbard squash is actually one of the largest winter varieties and it works well in both savory and sweet dishes. But this squash has a super tough skin. The flesh, however, has high levels of sugar, along with a texture that’s best pureed or mashed—think pie filling.

Due to its size, hubbard is usually sold in pre-cut, seeded chunks, so it’s easy to handle in the kitchen. If you do purchase the squash as is, the extra tough skin means it can be stored for months at a time.

Fill me up, buttercup (squash) baby: This orange and creamy-fleshed squash is sweeter than most, but it works equally for savory recipes. If you do choose the sweet route, bake or steam the squash to really bring out those sugary notes.

This squash provides a whole lot of beta-carotene, iron, vitamin C, and potassium, as well as calcium, folic acid, and B-vitamins. Its tough skin may make it more difficult to prepare.

As the temperatures continue to drop and the time to curate holiday menus approaches, there’s no denying squash is an incredible source of flavor, vitamins, and healthy nutrients—regardless of type and prep process. Squash can star as a weeknight meal and double as a moderately indulgent dessert. You really can’t go wrong.