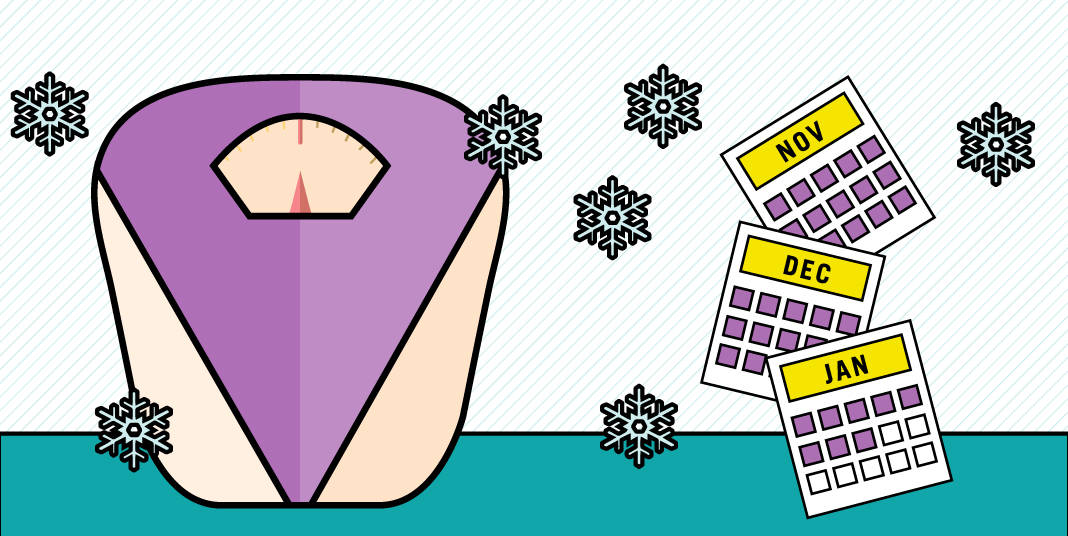 How to Put the Brakes on Winter Weight Gain

The winter poses unique obstacles for those leading a healthy lifestyle. It’s easy for many of us to go into hibernation, especially when the weather gets too cold to bear.

By facing the obstacles, understanding why they can mess us up, and then implementing ways to either avoid or counteract the damage, we can all start spring without several extra pounds of weight gain. 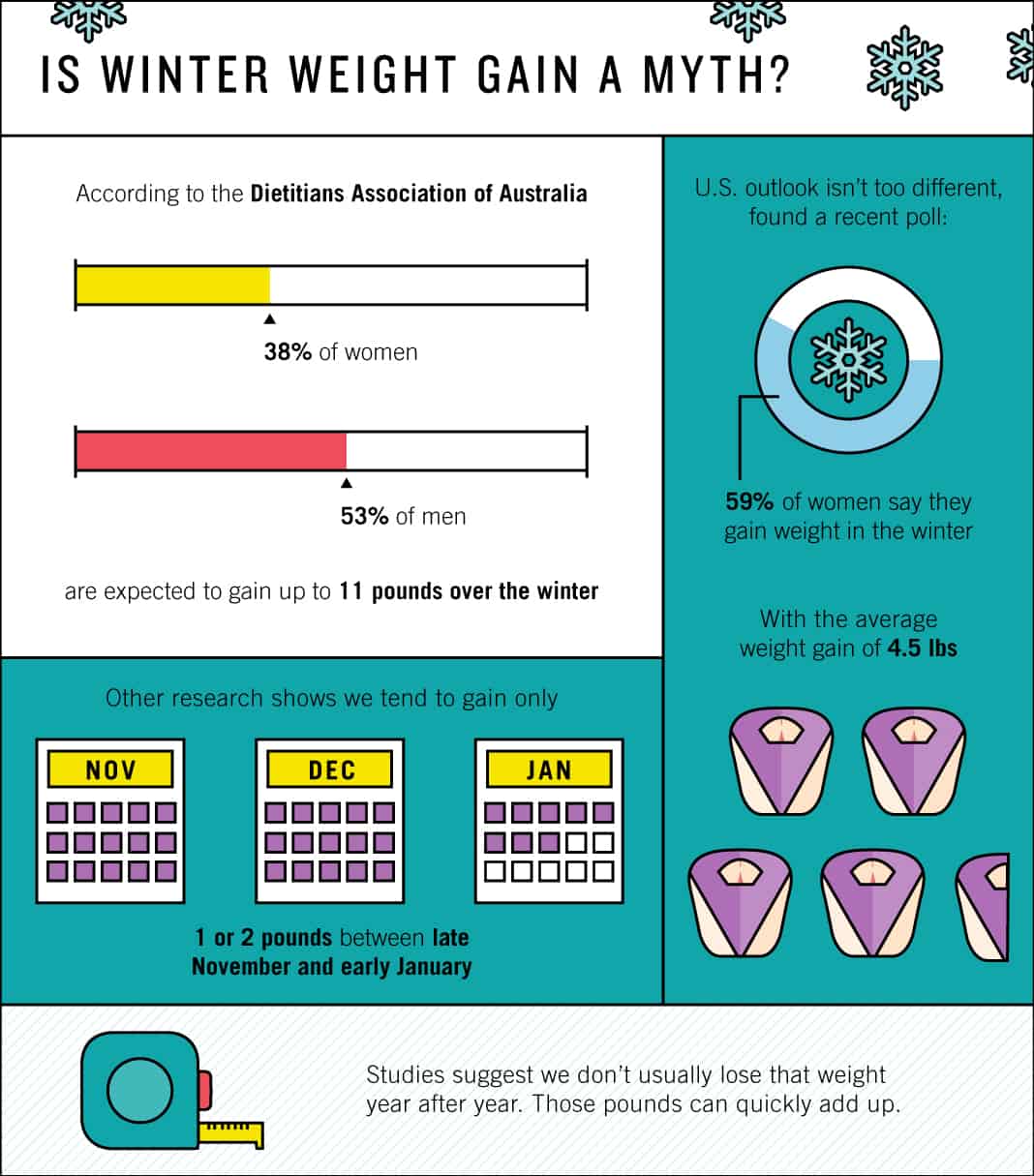 Where the Weight Gain Comes From

It all starts in October: Halloween may seem like a kid holiday, but then adults started throwing Halloween parties. These parties have turned into a smorgasbord of sweets that most people gorge on. (It’s hard to refuse a frosted, gooey brownie with cute little eyes and vampire teeth.) That’s in addition to all the inescapable candy we pass out to the neighborhood kids.
Halloween isn’t the only offender, though. Did you know the average person consumes about 4,500 calories on Thanksgiving Day? For most people, that’s about two to three times the number of calories you should take in daily (depending on activity levels, of course).

Next up is Christmas, so brace yourself: Holiday parties at work and with friends are followed by a big festive dinner. Special food is hard to resist, especially when resolutions are just around the corner. We’ll work it off later, right? That’s easy to say.

So do all the festive drinks

Let’s not forget the alcohol. We all like to have fun during the holidays, and adult beverages are often part of that the equation. One glass of red wine clocks in at roughly 125 calories—but three more glasses down the hatch and you’ve already consumed 500 calories of just wine. Beer drinkers end up doing the same, so don’t think you’re left out of the fun: Seasonal beers can pack a couple hundred calories each. You’ll also find more calories in most mixed drinks than in wine and beer, since mixers are often loaded with sugar and calories. 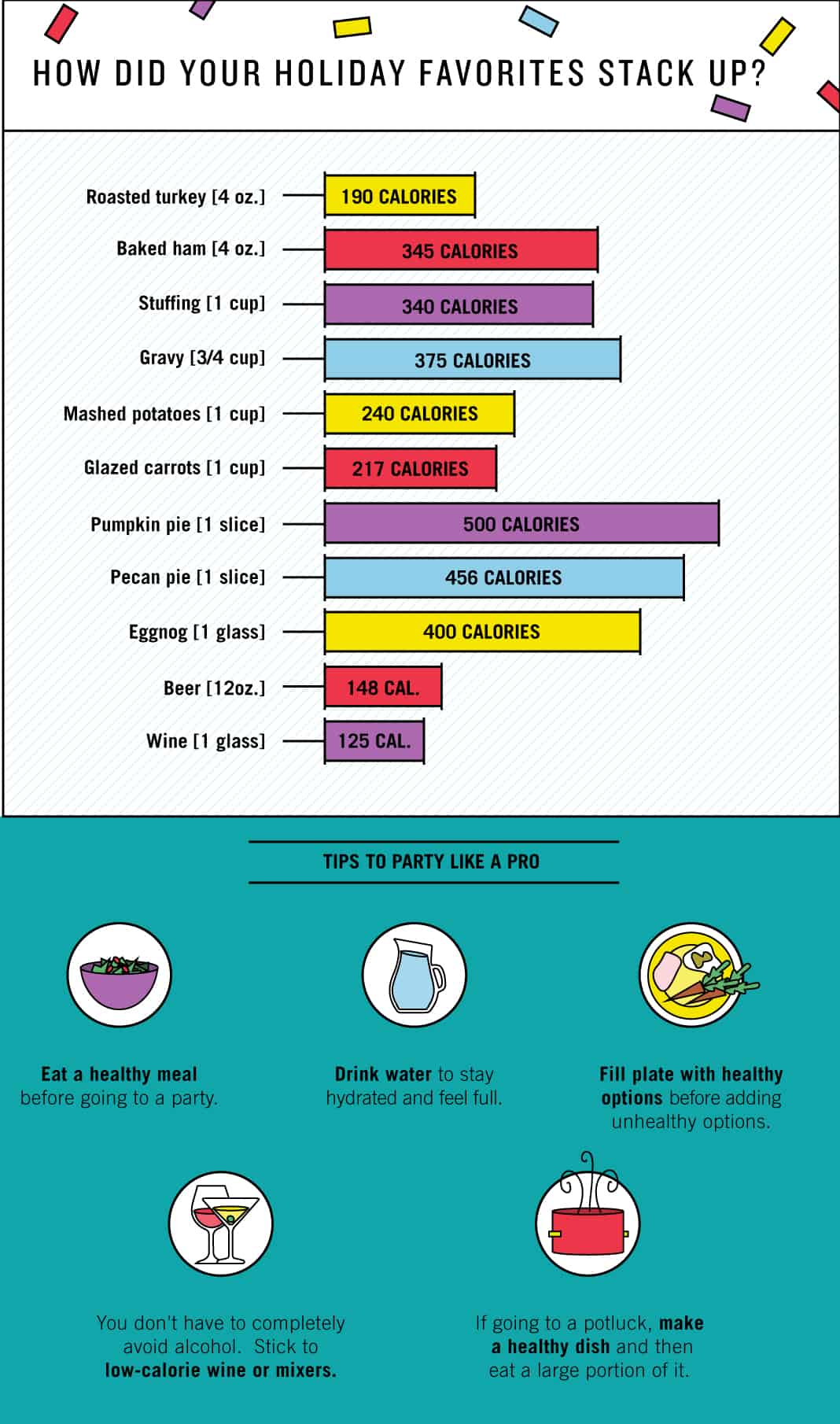 But winter weight gain isn’t just about all the delicious treats. To add insult to injury, winter poses weather-related fitness obstacles. If you’re a runner, it’s easy to look out your window and stop being a runner. Even going out to the car to drive to the gym can seem like an impossible feat in the midst of a snowstorm.

Since the sun sets so much earlier, you may start to feel more tired earlier in the day, which is just another easy excuse not to work out. The holiday season also leads to a major drop in productivity, which can translate to longer hours in the office to make up for lost time. In any case, more work usually leads to less working out. Less working out means fewer calories burned, and if you increase calorie intake, you know what happens next: weight gain.

As strong as you are, there may be times you don’t eat as well as you would like, but don’t beat yourself up over it. It happens. But it’s a good idea to make time for fitness so you don’t sabotage your hard work from the rest of the year.

Along with these festivities, we all know how the cold outside can lead to comfort food binges inside—macaroni and cheese, stews, chili, and plenty more warm food goodness. Though not always the case, comfort meals are often loaded with fat and calories. If it’s freezing outside, we don’t blame you for wanting to cuddle up in a blanket with a big bowl of chili or macaroni and cheese. It’s not that you can’t have comfort foods during winter, but it’s wise to choose options that aren’t as bad for you. Many slow cooker meals can be made with simple ingredient swaps that equal fewer calories and fat so you can continue to take care of yourself. For example, use leaner meat such as ground chicken in a ground beef recipe, or use low-fat broth instead of full-fat broth.

That’s enough discussion on all of the obstacles we encounter during the winter. Now it’s time to learn how to avoid gaining a few pounds when not-so-healthy food and drinks often abound: parties. These tips not only apply to holiday parties, but also to gatherings and celebrations any time of the year.

Eat a healthy meal before

Before you head out to a party, eat a healthy meal. Make sure to load up on protein so hunger doesn’t get the best of you when staring down appetizers and desserts. No need to have a full meal before you head out the door, but eat enough to take the edge off. If you need to eat a few more healthy food calories before the party that’s okay: It’s better than binging on sweets and other goodies. Don’t forget the liquids: Water keeps us hydrated and helps us feel full, so keep up the water intake before and during the party.

When tempting food is in front of you, take note of the healthiest items. Seek out a healthy protein like grilled or baked chicken or turkey. Next, focus on the vegetables. Remember: It is a party. It’s okay to indulge reasonably. The idea is to take just a little of the bad yummy stuff and a majority of the good healthy stuff.

Make wise decisions about the booze

You don’t have to completely avoid alcohol. Just be sure to stick with liquor that isn’t mixed with high-calorie juice. Before you head out to a party where there is a bar, look up some drinks to try. You’ll be surprised at how many options there are that don’t have many calories yet are high in flavor. Try reaching for a rum and (diet) coke, or a wine spritzer.

Include yourself in food prep

If you’re attending a potluck party, make a healthy dish and then serve yourself a large portion.

Remember, it’s all about portion control. Limit the amount of calorie-laden dishes and only take what you really want to eat. Ask yourself, “How much do I really want to eat that?” If your immediate reaction isn’t, “I really want it” you should move on to something else.

A party wouldn’t be complete without something sweet. It’s okay to indulge, as long as you don’t stuff yourself: Have one cookie or one brownie. Or get a skinny slice of pie and skip the whipped cream. Just think about how great it will feel when you have control over what you eat. Plus, you’ll help avoid a two-day-long food coma. 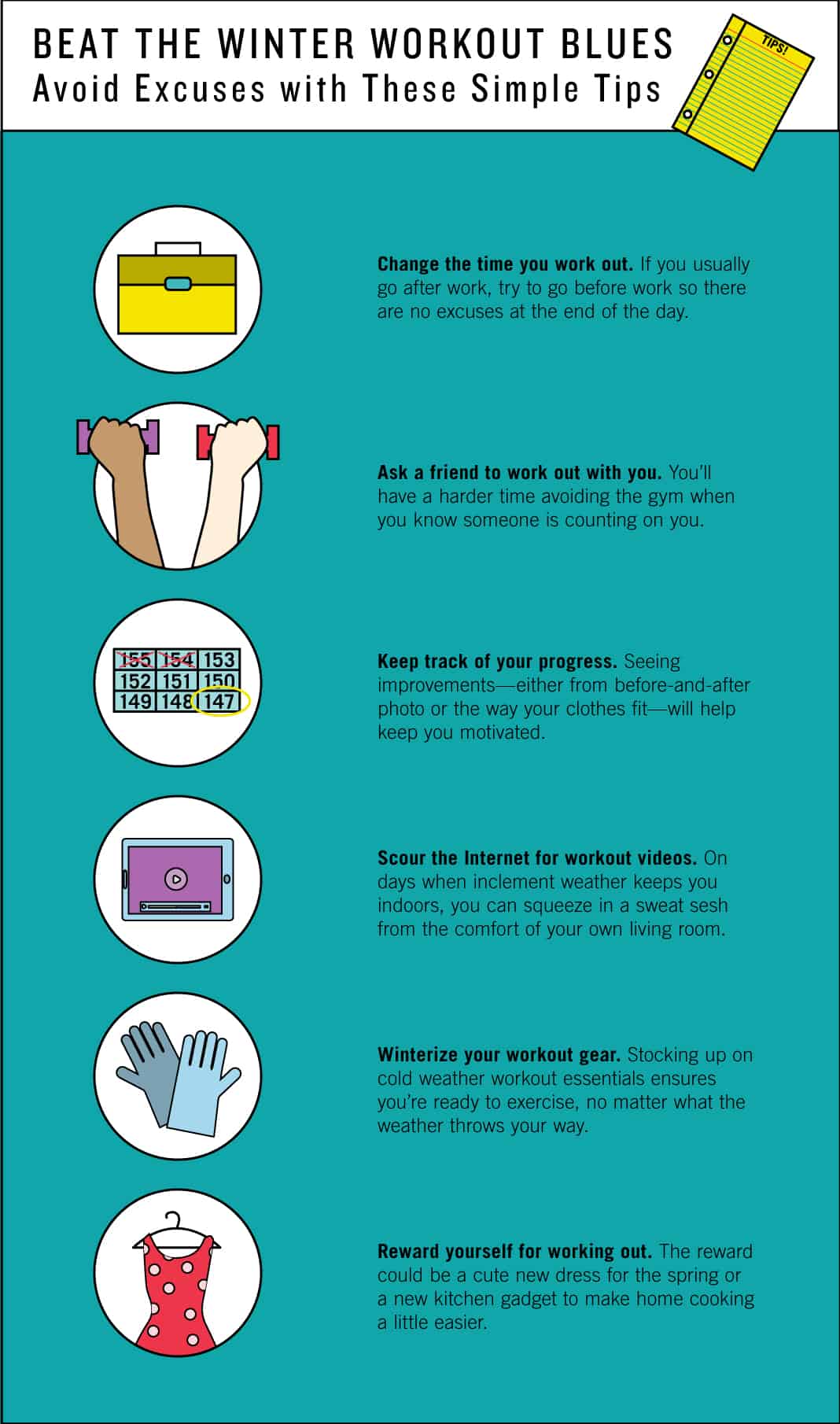 You are now armed with a way to overcome the obstacles of the cold, winter months. Just take one holiday and one craving at a time. For every one you get through without completely gorging, you’ll be that much closer to making it through the season with a healthy lifestyle still intact. Adrienne Erin is a freelance writer based in central Pennsylvania. Her passions include cooking, gardening, yoga, and taking road trips. You can follow @foodierx on Twitter to get in touch, or visit Foodie Fitness to see more of Adrienne’s writing.