When and How to Use Different Tomato Varieties

Thought kale was popular? Chew on this: Americans eat an average of 80 tons of tomatoes each year, making the fruit one of the most consumed types of produce and a staple in meals across the country.

Tomatoes are generally available for purchase year-round, though they taste freshest and contain more vitamins when consumed in season, which is typically during the summer months. Still, some varieties hold up better than others even in the middle of winter (more on that below).

Perusing a farmer’s stand or the produce section of the supermarket can be overwhelming because there are so many varieties of tomatoes available. Should you choose grape, Roma, heirloom? Which has the best flavor, and what will work best in that recipe you plan to make? Read on to learn the ins and outs of this versatile fruit.

Garden Varieties: How to Identify and Use Different Types of Tomatoes

Never get confused at the farmers’ market or in the kitchen again. Here’s an overview of each of the most common tomato varieties, as well guidelines for when and how to cook each one. 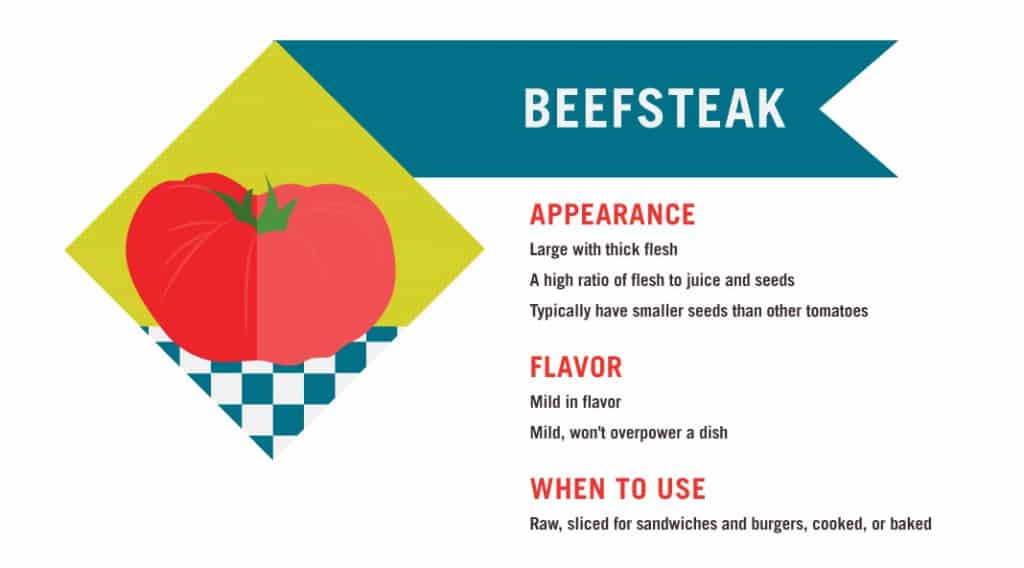 The term beefsteak can refer to any of a variety of large tomatoes. What they all have in common is their size, thick flesh, and high ratio of flesh to juice and seeds (they tend to have smaller seeds than other tomato varieties). While supermarkets often display only perfectly round beefsteaks, oddly shaped or lumpy tomatoes have the best flavor. Also, don’t be afraid to try colors that are not red.

Beefsteaks are mild in flavor, which means they won’t overpower a dish. Their size makes them ideal for a raw complement to sandwiches or burgers, but they also produce great flavor when cooked. They’re freshest in the summer; depending on where you live, you may or may not be able to find quality beefsteaks year round. Try them in any of these recipes:

Flavorful and thin-skinned, cherry tomatoes are mostly sweet and just a tad sour, which gives them a nuanced profile. Their richness means they taste great both cooked and straight from the vine (or container). Cooked or raw, they have a great texture that pops in your mouth.

Because of their thin skins, cherry tomatoes do not travel well, so seek them out at local farmers whenever possible. Cherry tomatoes are at peak flavor in the summer, but they retain flavor in the off-season better than some tomato varieties. Regardless of the time of year, cherry tomatoes offer the best flavor when cooked only for short periods of time; too long and the seeds can start to alter the flavor. Put cherry tomatoes to good use in the following recipes:

Grape tomatoes are among the sweetest tomatoes and boast brightly colored, taut skin. Their tough skins lend a meaty texture that holds up well when cooked.

Grape tomatoes’ sweetness makes them ripen quickly, so they’re often some of the first tomatoes in season. Their hardiness allows them to travel well; while local varieties almost always have the best flavor, you can still find high-quality grape tomatoes at the supermarket. Start cooking with them in the early spring and use year-round. 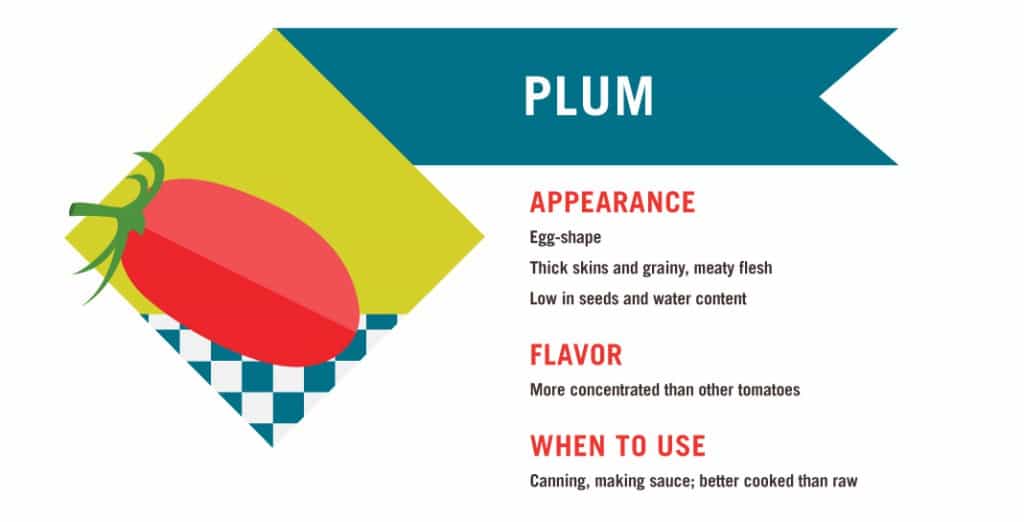 Egg-shaped, meaty, and low in both seeds and water content, plum tomatoes are ideal for canning or making sauce (as a result, they’re frequently called paste tomatoes). Most plum tomatoes sold in the Western hemisphere are Roma tomatoes, which have thick skins and grainy flesh.

While eating one raw won’t hurt you, plum tomatoes’ flavor comes out when they’re cooked. As with all other tomatoes, plums are best in season—but they’re also one of the best tomatoes to cook with in the off-season because their flavor and texture is generally superior to greenhouse tomatoes. Enjoy plum tomatoes in the following recipes:

Heirlooms and Other Varieties

Of course, no list of tomatoes would be complete without referencing the wonderful world of less mainstream varieties. Green tomatoes provide a spicy (and less sweet) flavor; yellow tomatoes are generally milder and less acidic than their red counterparts; and orange tomatoes tend to be fruity in flavor.

And then there are heirlooms. These range widely in size, color, and flavor. What heirlooms share in common is that each variety has been around for 50 years or more and does not contain genetically modified organisms (GMOs). Because heirlooms vary so widely, talk directly to the grower or seller in order to learn how to best work with a specific type. For the most part, heirlooms tend to be rich in flavor and taste great raw with just a drizzle of olive oil or a sprinkle of salt. 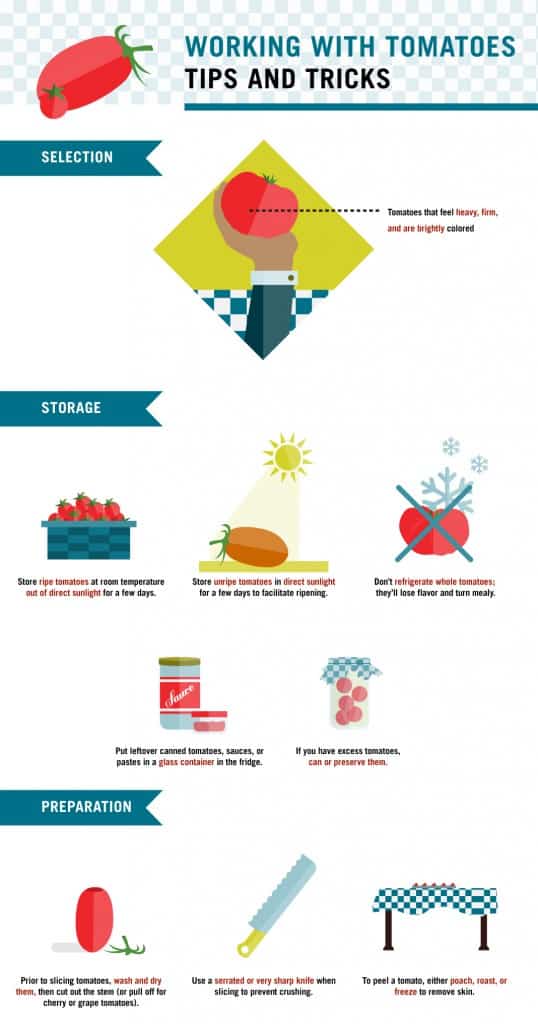 Tomatoes, tomahtoes: Perhaps they’re not as confusing as we thought. No matter how you pronounce it, they taste great and they’re ripe for the cooking. Laura Newcomer is a writer, editor, and educator with several years of experience working in the health and wellness space. Formerly Senior Editor at the health site Greatist, Laura is now a professional freelance writer and editor based in Pennsylvania. Her writing has been published on Washington Post, TIME Healthland, Greatist, DailyBurn, Lifehacker, and Business Insider, among others. She's covered a wide variety of topics related to sex and relationships, from open relationships, to the pros and cons of being "friends with benefits," to sex positivity. A former counselor for victims of sexual assault and domestic violence, she is a strong advocate for cultivating healthy and fulfilling relationships and sexuality at every age.